Since moving to Bosnia and Herzegovina, I have been chipping away at the weighty – and fantastic – Bridge on the Drina, a sweeping saga set in Višegrad and written by Nobel Prize-winning Ivo Andrić.  Višegrad is east of Sarajevo and the perfect distance for a road trip.  It also is near the Serbian border, across which is Tara National Park.

Our weekend plans were set – spend a day driving around the National Park and a day in Višegrad, snapping as many photos of the bridge as humanly possible.

We drove straight through to Serbia on Saturday morning and immediately began our ascent into the park.

Holy buckets.  This place was incredible.  I think I took roughly 587 pictures, and our Nissan got to practice 4-wheel drive up and through old logging roads.

Saturday evening we drove back into Višegrad, checked into our hotel, and made a beeline for the bridge.

Author Ivo Andrić spent most of his life in the Balkans, interrupted briefly by him serving as ambassador for the Kingdom of Yugoslavia to Germany before the outbreak of World War II and the subsequent German occupation of his country.  He wrote Bridge on the Drina in Belgrade while under house arrest from 1941-1945, and it was published to wide acclaim shortly after his release.

This historical fiction brings to life the drama and intrigue of Višegrad and the Ottoman-era bridge spanning the river Drina.

The bridge’s real history is as engrossing as Andrić’s fictitious account.  In the early 1550s, a young Orthodox Christian boy, living in a small village outside Višegrad, was taken from his family by the Ottoman empire to be raised and educated in Turkey.  This was a common practice of the day by the empire, and some of these boys parlayed their circumstances into lives of considerable power and wealth.  But none were so successful as that particular boy.  He worked his way up the Ottoman political system, amassing military victories and strategic alliances along the way, and eventually reached the title of Grand Vizier, the highest office in government.  He successfully maintained his position through the reign of three sultans. 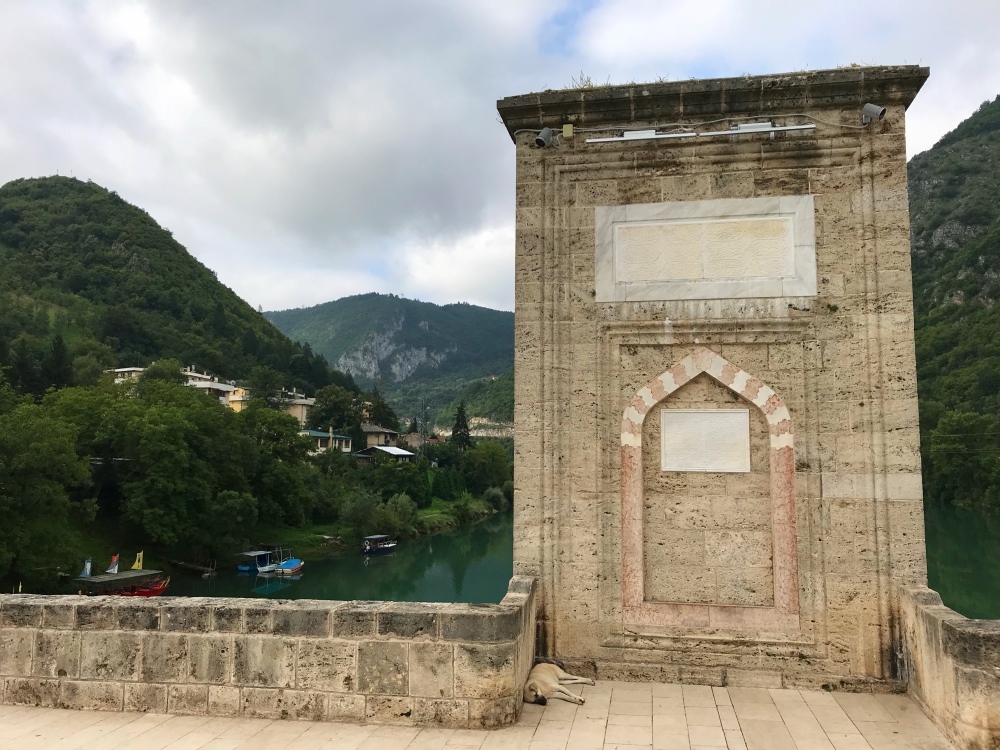 But he did not forget his home.  The Drina is a mighty river running through eastern Bosnia; during times of turbulent weather or the melting of mountain snow, the Drina could suspense all travel throughout the region.  So, Grand Vizier Mehmed Paša Sokolović decided to build a bridge.

He turned to the famous chief Ottoman architect, Mimar Sinan, for its design (the same Sinan who either directly or through his apprentices was responsible for, among other triumphs, the Stari Most bridge in Mostar, the Blue Mosque and Selimiye Mosque in Istanbul, and the Taj Mahal.  I’m a bit of a fangirl with this guy).  Construction lasted six years and the bridge was completed in 1557.  With the exception of periodic renovations, the bridge has remained standing in its original form ever since.

Today, the Mehmed Paša Sokolović Bridge is a UNESCO World Heritage site.  And even more beautiful than I imagined.